skip to main | skip to sidebar

listen to my mixes at http://www.mixcloud.com/djsputnik/
Posted by Sputnik at 10:46 PM 1 comment: 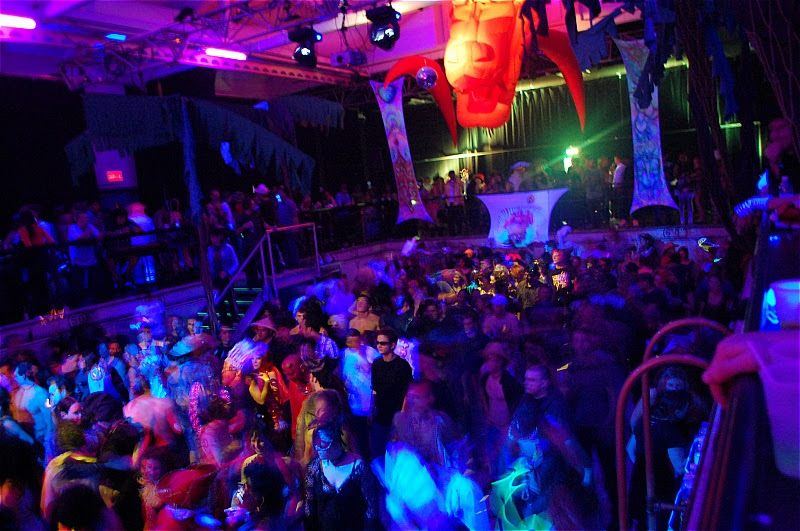 La SPAG/Bain Mathieu
2915 Ontario E.
Built in 1931, La Spag/Bain Mathieu is hardly a new space, but it has achieved talk-of-the-town status based on its gradual transformation into a multifaceted event space over the last two years. This is literally an old pool, complete with original ceramic floors and walls, a dome roof, an integrated sound system, and a standing bar around the pool. With a capacity of around 600, patrons congregate either on the floor of the pool, or enjoy the spectacle poolside. This versatile space has been used for everything from fashion shows, video shoots, DJ events and TV and film locations to corporate parties, dance performances, concerts, art exhibitions, seminars and bar mitzvahs. It’s an intimate and unique space that is definitely artist-friendly, and able to accommodate just about anything.

From http://www.montrealmirror.com
Posted by Sputnik at 11:07 PM No comments:

Every clubber has “The Club.” Be it the place that is designated as the Saturday Spot, or that foreign nightclub that just can’t be forgotten, there is always a certain club that holds a cherished spot in almost every clubber’s heart. What follows is a list of ten of the most incredible nightclubs from around the world. I say “ten of the most incredible” because I’m sure that not everyone’s going to agree. Everybody looks for something different in “The Club.” It could be the crowd, the venue itself, the DJ, or a mash of everything, so I’m not going to tell you that this group is The best. But it’s pretty damn close - take a look…

1. a style of dance music that originated in Guadeloupe and Martinique, featuring Caribbean rhythms over a disco beat and played with electric guitars and synthesizers

2. one of the top clubs in Singapore

How big is Zouk? It was the first night club in Singapore to play House music, and today is all the rage with the nation’s clubbing crowd. Zouk actually isn’t a club; it’s three interconnected clubs: Zouk, Phuture, and Velvet Underground - you can get an idea of what these three spaces are like, both visually and musically, by their names. Phuture is futuristic and plays broken beats, Velvet Underground has exquisite velvet-covered walls and plays laid-back house and soul, and Zouk, the main dancing stage, plays a blend of everything. Want more proof of Zouk’s commitment to being the best in Southeast Asia? It makes a point of sending its DJs to Europe and the US on a regular basis for “re-orientation,” and to acquire new music. Next time you plan a trip to Singapore, don’t leave until you’ve experienced Zouk.

It’s not the biggest club around England, but in this case, size doesn’t matter. How many other clubs do you know are ex-mills? Their aim is for you to have a good time, and luckily, you’ll find it hard to be disappointed. Three rooms (The Bar, The Basement, and The Boutique) each give you a different flavour, but for pure dancing, The Basement’s the place to be. What really had Sankeys flying up DJmag’s Top 100 Clubs Poll, though, was their “increasingly on-point” DJ line-ups. Justice and Carl Craig are only two of the regulars; where else would you want to be?

Next stop, Brazil. The party mood and rawness of nature that South America is famous for are fully infused in Warung. Surrounded by a beach and a rainforest, something about the passion of partying like mad amid the elements just feels right. If I had the use of a plane for a night, and could jet around the world to all the distant night clubs one after the other, this would be unquestionably be on the list. Add to that international DJs like Craig Vickers and Rowan Blades, and you’ve got all the exoticism you could ever want in a night club in Warung.

And… representing Canada… we have the Guvernment (you knew we had to have a Canadian club in here right?). But in all honesty, from an unbiased standpoint, this is one serious super club (nominated for Best Global Club in the International Dance Music Awards). With a capacity of 4000+, hydraulic light grids, and nine, count’em nine, specialized rooms, the Guvernment hosts more parties than Paris Hilton. You want futuristic? Go to the Orange Room. Feel like something mystical Moroccan? Try Tanja. Or just head up to the Skybar for a view of downtown Toronto that will leave you in awe. You can’t go wrong.

At night, a barge anchored on the Seine transforms into a cozy floating dance floor that is home to the best live electronic music in Paris. This place is off the beaten path for those preferring ritzy clubs that come complete with solid ground, so it’s left to those willing to seek it out, get their sea legs, and dip into the groundbreaking music scene.

You can grab a drink on the deck before heading below to the surprisingly large dance floor packed with dancers. The DJ proximity, unique setup and incredible sound system lend a bit of a house-party feel to the place, but the glimpses of Paris, France, through the portholes will remind you where you are, and don’t worry: After a few hours and a few drinks, you won’t even notice the tilting of the dance floor. For the ultimate night out, the New Year’s Eve celebrations here are the stuff legends are made of and can run for around 15 hours with a rotating roster of big-name DJs in the world of trance, house and techno.

Recently named the best club in the world (again) by DJmag, Fabric is a club that is universally acknowledged as being the best at what it does because it simply focuses on the heart of club culture: the music. Although Fabric has been graced by the presence of top DJs, it is most widely celebrated for bringing underground dance music and more obscure, but still talented DJs to the spotlight. Fabric was also the first club in Europe to house what it calls a “bodysonic” dancefloor: clubbers on the dancefloor can literally shake it to the beat because parts of the floor are hooked up to 400 bass transducers that pump out the music being played, right into the dancing bodies via their feet. With 25000 square feet of room to get shook in a club in which “there’s never been so much as a dud DJ,” Fabric more than deserves a spot in this list.

Another nominee for Best Global Club (and another Ibizan club), Space does not lack any, as it was built on a sprawling parking lot. Its history is so deep-rooted in the growth of club culture that there is almost a kind of mutual respect between Space and the world-class DJs who have played there over the years. Extensive renovations have only improved this Ibizan paradise, and with its consistent Top 2 ranking in DJmag’s last few polls, Space is here to stay.

Womb is a club in Japan.

If any derivative of the word “technology” has not crossed your mind yet… then I must say I’m very disappointed in you. As would be expected of a Japanese creation, Womb is ultramodern (DJmag calls it a “space station”), with first-class lights and sounds - with major emphasis on sounds. Womb features plenty of space on its sizeable dance floor, above which hangs one of Japan’s largest disco balls: 1.5m across.

Glass walls on the top floor overlooking everything?

What is with Spain and its amazing night clubs? When the ice cannon welcomes you with a shower of dry ice, you know that you’ve arrived. As befits the night club crowned Best Global Club by the IDMAs, Amnesia’s sound system leaves little to be desired. Cream night at Amnesia always brings out the crowds, and the foam parties are inimitable. With a line-up that includes Armin van Buuren and Sven Vath, Amnesia has all its bases covered. What else would you expect from the best in the world?

Cocoon is another club that is linked with Sven V?th, but unlike the others, this night club completely bears the stamp of this legendary DJ. You can’t help but feel like you are really in a cocoon, although maybe in an aber-modern style of cocoon. Both visually and acoustically, this club’s design is awe-inspiring; there is a 100m across, 360 degree screen bounces synchronized lights and images off it like no other. Add to that stunning cocoon-like features like a 100m long iridescent “Membrane Wall” and actual “cocoons” (each with a minibar, light controls, and a sound system), and once you get into Cocoon, you won’t want to come back out.

Posted by Sputnik at 8:39 PM No comments:

Born in the northern Venice of Eastern Europe, Saint Petersburg, where he studied classical music. In 1991 moved to Canada. A natural since his early teens, Sputnik began spinning for friends at private parties, and was soon moving the dance floors of Montreal's underground. Since 1997, he played the best of trance and house music in raves and clubs with already then known DJs like the Liberators or Christopher Lawrence. In 1999 got his first Fridays and Saturdays residency downtown Montreal. In 2000, he started getting exposure in Toronto in clubs like Activ8, Sugar, Static, Phantom and Luxor. In 2002, he mixed at the legendary SONA afterhours in Montreal. Then came a very memorable trip to the glamorous club Zeppelin located in the heart of Moscow. His 2003 kicked-off at Apocalypse, an annual event at the Maurice Richard Arena. Later that year performed with Cosmic Gate at the Gravity afterhours. In 2004, he rocked the dance floor of Circus afterhours, a Montreal favorite by Robbie Rivera, Danny Tenaglia, Tiga, Eric Morillo and Tiësto. From 2005, he has been a resident at the annual event Zima Project at the Guvernment (Toronto). In 2006 before moving to Europe, he opened up for Nadia-Ali, the beautiful voice behind Iio - Rapture. In Paris he span at clubs: Qin (Champs Elysées), La Villa and Plaza Madleine. In Geneva, VIP club Krystal. He is now back in North America to share his emotions.